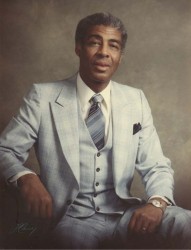 Kelly Miller Smith was born on October 28, 1920 to Perry Monroe and Priscilla Anderson Smith in the all black city of Mound Bayou, Mississippi.  He was the fourth child in a Christian family of seven children.  He departed this life on Sunday evening, June 3 1984.

At an early age he joined the First Baptist Church of Mound Bayou.  His pastor who baptized him sensed that one day he would become a minister.

After receiving his early education in Mound Bayou and graduating from Magnolia High School in Vicksburg, he began his college career at Tennessee State University as a music major.  Kelly played a variety of musical instruments including double bass, xylophone and piano.  He had many musical compositions to his credit.  His faith and devotion to Christianity, however, led him to Morehouse College where he graduated with a Bachelor’s degree in Religion.  He went on to receive the Master of Divinity Degree from Howard University Divinity School which also awarded him the honorary Doctor of Divinity degree in 1976.

Hi first pastorate was at Mount Heroden Baptist Church in Vicksburg where he served for five years.  Once again the music bug revealed itself in his pastoral activities as he arranged music for a church choral group, “The Chansonettes”, which he directed.

In 1951, Reverend Smith was called to become the pastor of First Baptist Church, Eighth Avenue, North – now Capitol Hill, in Nashville, Tennessee.  He and his young wife, the former Alice Mae Clark of Jackson, Mississippi and their baby girl, Joy Ardelia, moved to Tennessee.  He remained at First Baptist for thirty-three years with the exception of a four month period in 1963.

Early in his ministry in Nashville, Reverend Smith became a leader in the struggle for human rights by assuming the major leadership role in the sit-in demonstrations and the desegregation of the public schools.  He founded and presided over the Nashville Christian Leadership Council (NCLC) and the local chapter of the Opportunities Industrialization Center (OIC).  He served also as President of the Nashville chapter of the NAACP.  Time Magazine noted that “he is the one person who deserves major credit for Nashville’s racial transition.”

In addition to his many pastoral accomplishments, Reverend Smith inspired the congregation to construct two magnificent facilities: the new church building which was opened and dedicated in March 1972; the first minority owned housing unit in Nashville for the elderly and handicapped – the one hundred ten (110) unit Kelly Miller Smith Towers.

Another significant aspect of Reverend Smith’s leadership lay in the area of education.  In addition to his struggle for racial justice in public education, he founded several scholarship funds both at the church and beyond.  As a teacher he has served on the faculties of Natchez College, Alcorn College American Baptist Theological Seminary and for the past sixteen years at Vanderbilt Divinity School where he also served as Assistant Dean.  Reverend Smith has lectured widely in numerous universities and colleges throughout the country.  His invitation to deliver the 1983 Lyman Beecher Lectures at Yale University constituted one of the highest honors in theological education.  Those lectures were published in May of this year by Mercer University Press under the title, Social Crisis Preaching.  Numerous publications have reported on the life and ministry of Kelly Miller Smith.

Reverend Smith’s leadership on the national and international scenes has been most significant.  He was a founding member of the Southern Christian Leadership Conference; President of the National Conference of Black Christians; National Chairman of the International Freedom Mobilization, and served on numerous boards and committees of national church and civic organizations.  Further, Reverend Smith has preached widely in various countries of the Third World including the Democratic Republic of Zaire, Ghana, South America and India.  In Zaire he was appointed Honorary Tribal Chief of the Basuka Tribe.

Reverend Smith’s commitment to the Ecumenical Movement was evidenced by his long years of service as a member of the Faith and Order Commission of the World Council of Churches.

In brief, Reverend Smith’s life and ministry made an indelible mark on all dimensions of our common life.  His congenial personality, his expertise in numerous fields, his ability to mediate and promote calm when circumstances often dictated otherwise – all demonstrated his devotion to God and his love for all peoples.  His immediate family, his church, his community, his friends, far and wide wil be ever grateful for the tremendous contributions he made to their lives.